Japanese architect Toyo Ito has been announced as the 2013 Pritzker Prize Laureate.  The prize, often referred to as the Nobel of architecture, is awarded each year to a living architect whose built work demonstrates a combination of those qualities of talent, vision, and commitment, which has produced consistent and significant contributions to humanity and the built environment through the art of architecture.  The jury citation opens stating that "throughout his career, Toyo Ito has been able to produce a body of work that combines conceptual innovation with superbly executed buildings."  The citation went on to refer to Ito as innovative, responsible, and concerned with the future and education of architects.

My personal knowledge of Toyo Ito came during the start of my architectural education with the Sendai Mediatheque, one of his most recognizable projects.  Opened in 2001 the Mediatheque is a library and museum with a focus on new media.  While to program to was quite unique at the time one key feature of the Mediatheque is it's structural system of bundled tubes that contain program elements within.  This innovative feature demonstrated a different approach to structure as well as space.  Other notable work by Ito include the "White U" house for his sister which could be credited for jump starting his career, the TOD's Omotesando building where Ito once again explores structure, this time serving as the buildings skin.  More recently Ito has worked to help those affected by the 2011 earthquake in Japan through the "Home-for-All" project alongside other Japanese architects.  In addition to, or more accurately, associated with his architectural works Ito has published numerous writings exploring different subjects which he addresses in his built work.  He seems to always be addressing the larger issues of architecture while addressing the needs of a specific project, a quality necessary in any Pritzker Laureate.

Upon receiving the honor Ito humbly replied "I have been designing architecture bearing in mind that it would be possible to realize more comfortable spaces if we are freed from all the restrictions even for a little bit. However, when one building is completed, I become painfully aware of my own inadequacy.... Therefore, I will never fix my architectural style and never be satisfied with my works."

The official presentation of the award will take place May 29, 2013 at the John F. Kennedy Presidential Library and Museum in Boston, Massachusetts.  For additional information visit www.pritzkerprize.com and www.toyo-ito.co.jp

Below are some photos of some of Toyo Ito's notable works:

A is for Architecture Now Available

I'm proud to announce that "A is for Architecture" my self published architectural children's book is now available for sale.  You can check it out at Van Alen Books in New York (30 W. 22nd Street - Btwn, 5th & 6th Ave.) once you go in the store the children's section is directly to the left.  It's a great architecture book store so I recommend you check it out either way. The book is also available through my website here. 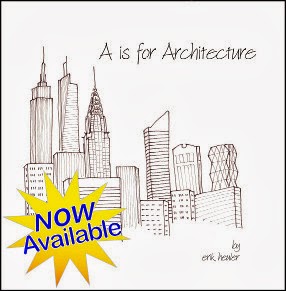